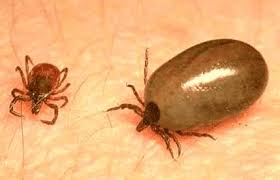 The winter is slowly giving way to Spring here in the Ottawa Valley. The sun is shining and the days are longer which means the bug season is just around the corner. Bees, wasps, mosquitos and black flies get most of the attention in these parts but perhaps some of the most problematic bugs we need to be aware of are ticks.

Are there ticks in the Ottawa Valley?

Absolutely. Ticks usually hang out in longer grassy areas or in thick underbrush. While ticks are out in all of the warmer weather seasons, Early Spring and Fall are usually when they are most abundant. Some believe that ticks are becoming more and more common as we get milder and milder winters. Ticks basically burrow into your skin and feed on your blood. They start out about the size of the end of a pen and after they’ve fed on your blood for a bit they swell to about the size of your fingernail. While this is less than appealing, ticks themselves aren’t that big of a deal. The real problem is that some ticks carry, and can transmit to humans, Lyme Disease.

Is there Lyme Disease in the Ottawa Valley?

Absolutely. Even within a small circle of friends I know of several people (and several dogs including my own) that have been infected and diagnosed with Lyme Disease. Lyme is very tricky as there is sometimes a bullseye like rash that forms (but not always) and other symptoms are achey, flu-like feeling that may show up days, weeks, months or even longer after you get infected. It gets even more problematic as it isn’t easy to diagnose and there are some health professionals that don’t believe it is really in the area or a problem (get a second or third opinion if this is the case for you). So how can we keep ourselves protected?

Do Regular Checks for Ticks

To get Lyme you need to be bit by a tick that is infected (not all are) and it has to be on you for about 24 hours. If we can remove ticks before they become encouraged in blood we are probably in the clear. If you are in tick areas wear long sleeves and pants and tuck them into your boots. Stay away from tall, grassy areas and stay in the middle of trails. Check after walks for ticks on you (and your pets) and brush or comb them away before they become attached. If they are already attached, while there are many methods for removal, using a pair of tweezers is very effective. The trick is to grasp the tick as close to the skin as you can and hold with just to enough pressure to have a grip on the tick. Pull very slowly (until the skin tents) and wait until the tick releases. Avoid twisting or ripping it quickly as you may rip the tick in half with the head still lodged in you. Watch for signs of infection and if you are at all concerned about Lyme contact a health professional and be very wary if any of the symptoms start to appear.

Some areas have more ticks than others. I probably see on average one or two ticks on my dogs in year but other areas will have dozens of ticks on them every time they wander in the woods. Be vigilant, and aware, and we can minimize our chances of having any long term issues down the road.

« Worried about doing the wrong thing in an emergency? These 3 things ensure you won’t!
Red Cross still offering courses in Renfrew County! »